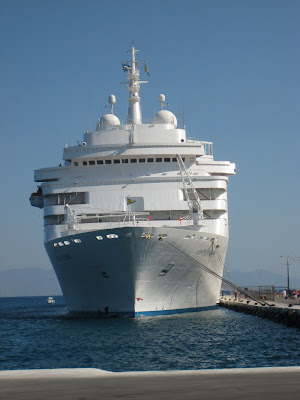 May 27 Day at Sea
Upon waking up, both Linda and I virtuously went to the fitness center only to find that it didn’t open for another twenty-five minutes. We had coffee (Linda) and tea (me) and returned to work out.
It was a day of reading, eating, and relaxing. I started another book, Tea House Fire set in Japan in 1853. A French orphan is taken in by a famous tea ceremony family and accepted as Japanese until she is about forty.
Linda and I enjoyed the “classic” tea again in the afternoon.
We ate our last dinner with our new friends. Angelo said that he had all the Sundays through August planned. He would be saying mass around the state for vacationing priests. He said the pay was good. I said that I thought priests took a vow of poverty, and we had been wondering how he could afford to go on cruises every year. He said he didn’t take a vow of poverty, that only priests of certain orders did that. He took two vows: celibacy and obedience. He said celibacy was kind of tough but obedience wasn’t hard. Angelo just said “yes’ to the bishop and did whatever Angelo wanted. They weren’t going to fire him as there aren’t enough priests as it is.
Linda and I went back to our cabins, packed, and put our luggage outside the door to be picked up and delivered to the terminal for us. We worried about getting back our passports before we disembarked. We got conflicting stories on when and where to pick them up.
Posted by A Penchant for Peru at 1:07 PM