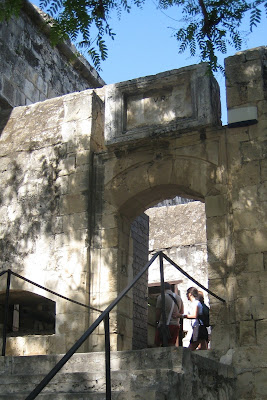 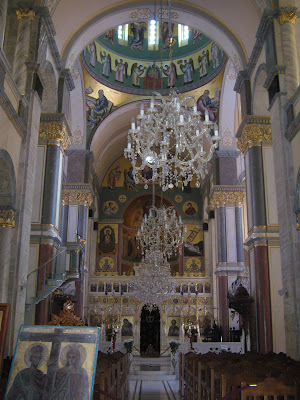 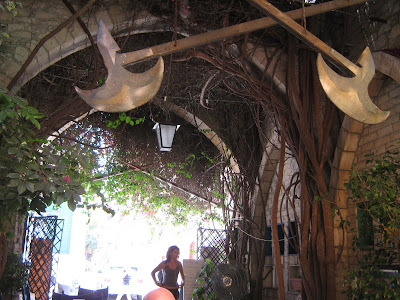 May 23 Limossol, Cyprus
This city of 177,000 people is the largest on the island. We couldn’t get our passports back. I guess we don’t need them here. Neither Linda nor I were impressed with Cyprus. She thought that must be a port to take on fuel or food or some other mundane reason. We took the shuttle bus into town and were not tempted by the shops. We saw Limossol Castle, built in 100 A.D. by the Byzantines.
We also saw the Limassol Orthodox Cathedral. It was built on a holy site and renovated by a monk in 1700. Another church was built on the site and looked like a castle. The Turks took offense of this Christian Castle and mob wanted to tear it down. The monk bribed wealthy Turks to calm down the mob. The wealthy Turks suggested that the monk throw coins in the courtyard. It worked. The mob concentrated on finding money rather than razing the cathedral.
We stopped and had a snack at a pleasant café. Joanne joined us and told us about their tours of Egypt.
We were back on the ship for lunch. We were seated with a German couple. Only the woman, Helga, spoke English. We had quite a nice conversation about how her sons work outside of Germany, one of them in Houston, because they can’t get good jobs within the country. The brain drain is a real problem there.
Linda sunned on the top deck and then went on a tour of the ship’s kitchen. I started a new book, The Quilter’s Homecoming, book ten in the Elm Creek Quilt series. I’ve read a few of them. We went to an Italian lesson with Shannon, the English-speaking hostess on the boat and Barbara, an Italian member of the crew. It was fun and informative.
We had a delightful dinner with our tablemates. Luis, our waiter, played a joke on Joanne, making believe he was spilling soup on her. We again skipped the entertainment that night, an illusionist and an acrobat.
Posted by A Penchant for Peru at 2:19 PM