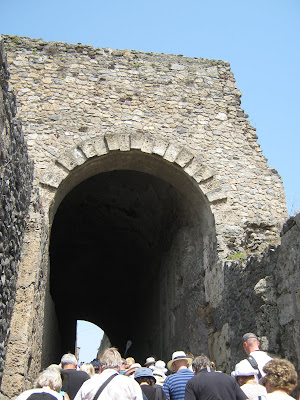 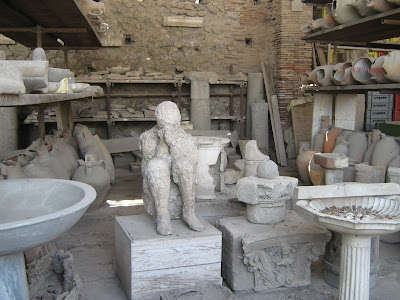 Mt. Vesuvius in the background 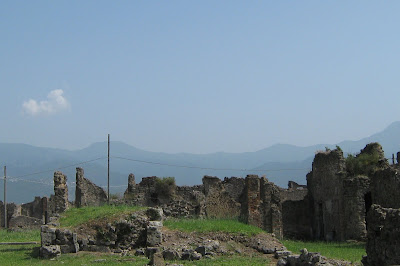 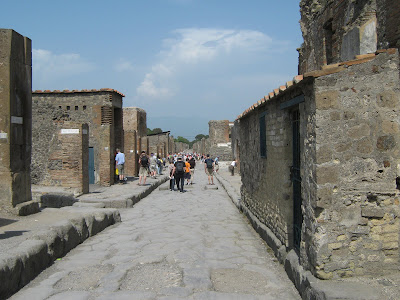 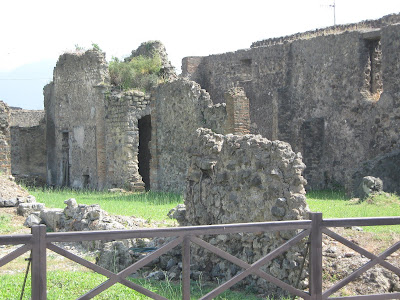 Steps to cross the urine-filled streets 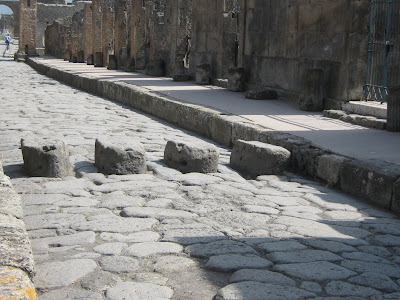 Fountain in the House of the Small Fountain 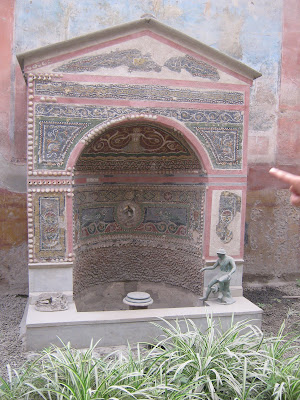 Faun statue for which the house was named 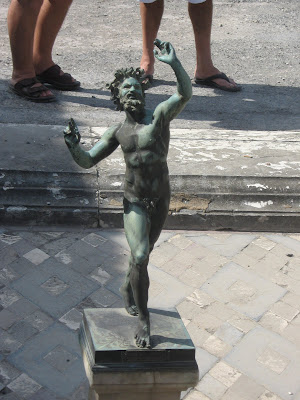 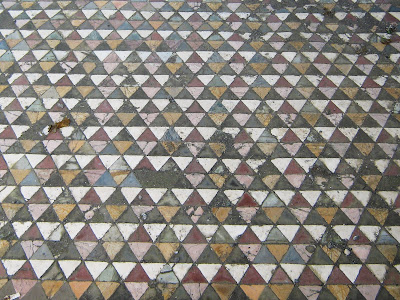 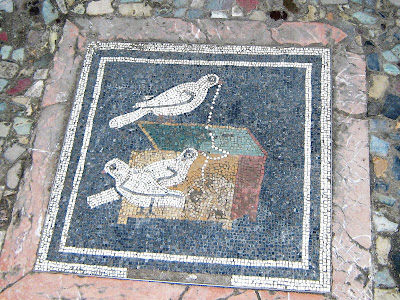 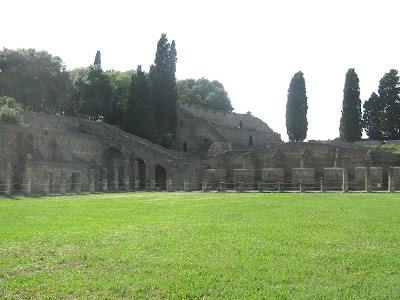 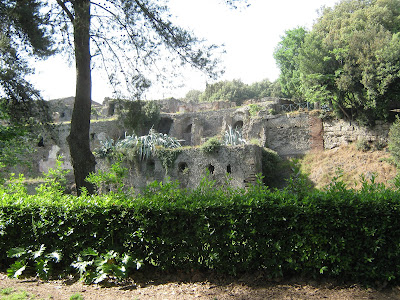 May 18 Naples (Pompeii)
The next day we docked at Naples and went on a tour of Pompeii. Enzo, our guide, was a proud fourth generation guide. He thought Americans were too loud. First we went to a cameo factory. It was a bust. No one bought a thing. We rode a while before arriving in Pompeii. Vesuvius erupted in 79 A. D. covering Pompeii in 59 feet of ash. Perhaps 20,000 people were killed. Pliny the Younger was an eyewitness to the eruption and its devastation as he saw it across the bay. He wrote about it 25 years later. His uncle, Pliny the Elder, was killed trying to rescue people from the eruption. Pompeii remained covered until it was rediscovered in 1748. There was no serious effort to unearth it. That may have been due to the culture clash. Pompeii was a resort renowned for its pleasures of the flesh. Notables who saw the erotic art ordered it buried again.
We first went to the marine gate. The sea was right outside the city gates before the eruption. We went to the Forum where justice was meted out and where they also sold grain. The columns were not marble but made to look like they were.
Stones were placed in the streets so people could cross without having to step in the steam of urine. The stones were strategically placed so wagon wheels could go on either side. We saw a bar that had two holes for vats, one for wine and one for beer. People pulled up to the bar, ordered their drinks, quickly drank them, and went on down the road.
They had aqueducts that delivered water to the city and its fountains. These were greatly improved after 69 A.D. when Pompeii became part of the Roman Empire.
Grain was sold by volume. The grain was put in a bowl that had an opening at the bottom. The buyer placed a sack underneath to catch the grain when the trap door was opened. The carrying vessels were cone shaped so they could be put in board with holes for them to be carried by horses or carts without spilling.
There were storehouses of pottery and other relics found during excavation as well as plaster casts of people and dogs. When the archeologists came to an air pocket, they filled it with plaster. This is how they captured the shape of the people who were incinerated with hands over their mouths and eyes.
The houses of prostitution were indicated by a sign. We saw a public laundry. Men were paid for their urine, which was used as a soap and disinfectant. The urine was them sold at a 300% profit.
The house of the small fountain had amazing murals and mosaics as well as a sleeping dog. Enzo said these are dogs that have been abandoned. But what do they eat? No one lives in Pompeii and there are no food vendors.
The house of the faun (the product of a man and a goat) had a small statue that gave it its name. The home was very large and had its own laundry so they could use their own urine as soap. There was a mosaic mural of Alexander the Great fighting the Persians.
The amphitheatre was in very good shape, and the arches of the entrances were striking.
After the tour we tasted lemon cello. Yuk! Linda and I bought erotic mural postcards since Enzo did not want to take us to the brothels where the murals advertised each prostitute’s specialty.
We had a nice dinner and went to a show of flamenco dancing.

FREE hit counter and Internet traffic statistics from freestats.com
Posted by A Penchant for Peru at 3:14 PM