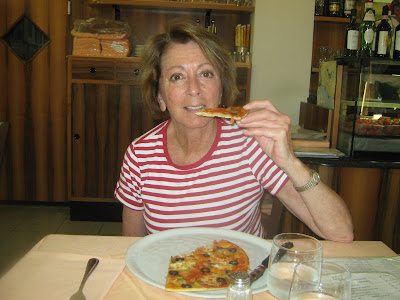 May 29 Vienna
The next morning we had a complimentary sumptuous breakfast at the beautifully appointed hotel dining room. After we checked out we walked to the train station and took a bus to the Genoa airport. We felt smug saving big bucks from using a taxi. We had to wait three hours for our flight to Paris but had to scurry to catch our flight to Vienna.
I had booked an airport hotel, through Expedia, since we were arriving at 6:30 p.m. and our flight to the U.S. the next day was in the morning. When I looked the Eurohotel in Fischland, Austria up on the Internet, its site said it had free shuttle service to the airport. After several misdirections and getting wet from the rain outside, we finally found the place to call the shuttle and had to wait a while for it. The hotel had rounded edges and was jarringly modern. The rooms were like dormitory ones, quite a come-down from the Savoia. There was no restaurant in the hotel. The clerk suggested we eat chips for dinner. When pressed he said that there were some places to eat down the road. He also informed us that he would order the shuttle for the next morning but it would cost us ten Euros since we booked through Expedia. I hope the fellow that gave us the ride to the hotel doesn’t get stiffed.
It had stopped raining by the time we were ready to set off walking. We found a very small restaurant, “Edi’s Imbiss-Stuberl.” There was plenty of outdoor seating that was stacked up due to the rain. Inside the smoke was so thick you could send signals. It was obviously the neighborhood hangout as the tables were filled with twenty-somethings and their children. Linda ordered a draft beer, so appropriate for Austria while I stuck with Coke Light. The only employee (Edi?) pounded and cooked up our vienersnitzel. The portions were so big we could have shared a dish and still had some left over. The sauerkraut and potato salad were outstanding.
It was raining when we went to the airport the next morning. Good thing we hadn’t planned on sight-seeing in Vienna. Checking in was little hairy as Austrian Airlines’ computers weren’t doing well. We had planned a lot of time and we needed most of it. I had finished my book and was frantic to get another book before we boarded a plane for a ten hour flight. I found a great selection of books in English in the airport bookstore but only bought one when I saw the price, sixteen Euros (about $20.00) for a trade paperback. Luckily Inspector Singh, A Most Unusual Murder in Malaysia, was worth it. I finished it because I couldn’t sleep and Linda and I both had middle seats in different rows. All the international flights we took didn’t assign seats until you checked in.
We waited in quite a long line to get through immigration and then customs in the Washington D. C. airport. When we arrived in Boston, Linda called the limo and it was waiting for us. Mike, the father of the owner of the car service, wanted to chat but neither of us was up to that.
It took us quite a while to recover from our jet lag. Our dream had been to see the pyramids. They lived up to our expectations with the added bonuses of the other antiquities: Pompeii, the Acropolis, and Olympia.
Posted by A Penchant for Peru at 11:48 AM