Ancient bowl where the Olympic torch is still lit 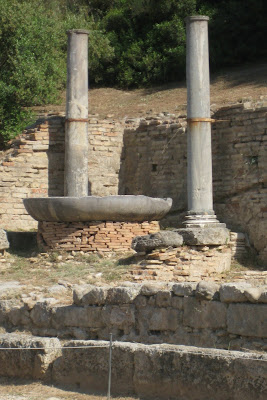 Images of Olympia, site of the ancient Olympics 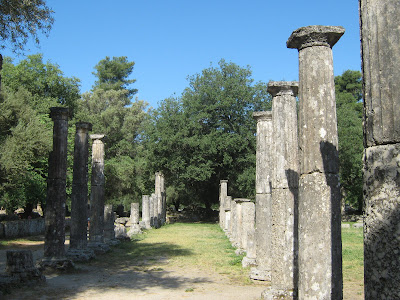 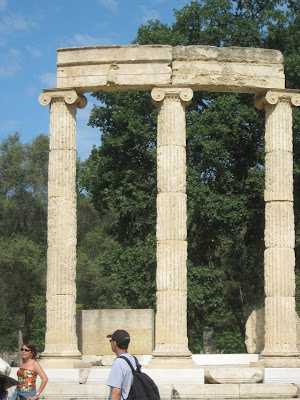 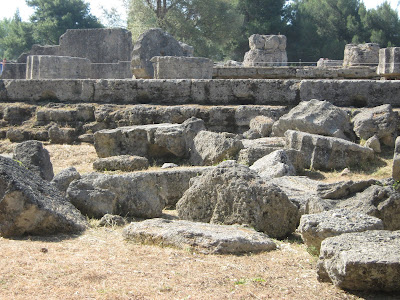 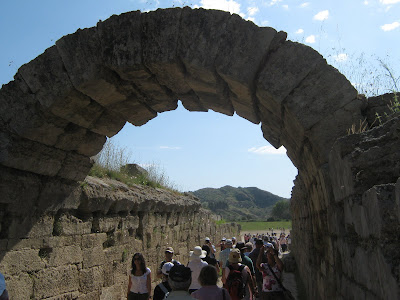 French tourist on our tour 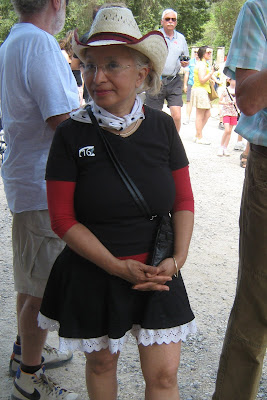 Annie at the Phillippeion in Olympia 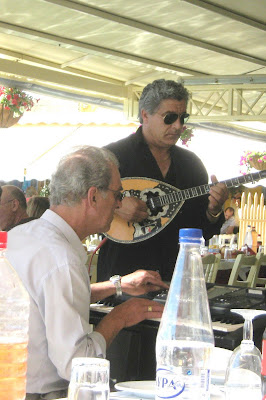 Gala dinner: our waiter and the somehwat smug captain 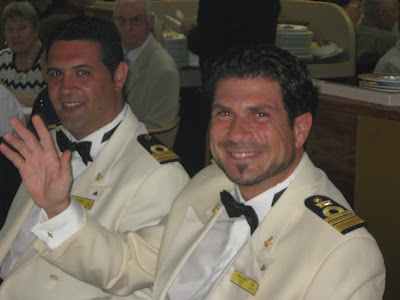 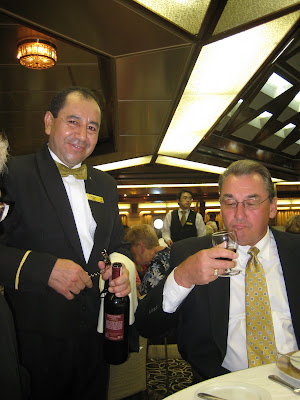 May 26 Olympia
Our guide Natasha had to do the tour in both English and German, and she did it very well. Olympia is very flat. The myth goes that Gea was the goddess of the earth. Kronos, her husband, was warned that one of his children would kill him. He swallowed the first eleven children but when the twelfth, Zeus, was born, she gave him a rock covered with a cloth and said it was the baby. Zeus grew up in Olympus. He went to see his father, Kronos, and opened up his stomach to free his brothers and sisters. He made Mt. Olympus the home of the gods. The Olympians thought that earthquakes were Titans (giants) trying to get out.
A myth about the origin of the Olympic Games comes from the Tenth Olympian Ode of the poet Pindar. He tells the story of how Herakles, on his fifth labor, had to clean the stables of King Augeas of Elis. Herakles approached Augeas and promised to clean the stables for the price of one-tenth of the king's cattle. Augeas agreed, and Herakles rerouted the Kladeos and Alpheos rivers to flow through the stables. Augeas did not fulfill his promise, however, and after Herakles had finished his labors he returned to Elis and waged war on Augeas. Herakles sacked the city of Elis and instituted the Olympic Games in honor of his father, Zeus. It is said that Herakles taught men how to wrestle and measured out the stadium, or the length of the footrace.
The first Olympic Games were held 776 B.C. They continued until 394 A.D. when they were abolished by a Christian Byzantine Emperor. The games were open free Greek citizens. This allowed the city-states to compete on safe ground. There was no war during the games as the soldiers came as contestants. They were either rich or supported by a city-state. They served as diplomats to find ways to solve political problems. The athletes came in July (or August, depending on the cycle of the moon) for three months of training before the games. No women or slaves or barbarians were allowed to observe the games. The winners received olive tree garlands. Winners of the games had their city-states carve statues for them that were displayed at the Olympics. Cheaters were permanently disqualified from competing. Their city-states also had to make a statue of the cheater and his city-state was displayed on the statue. Only the finals were held in the stadium. Forty to fifty-five thousand people attended the finals. The city of Elise had the responsibility for the Olympics.
The ruins were a bit disappointing as there wasn’t much left. The Lyceum was for wrestling and had rooms for the athletes to stay. Since they competed nude, the men wrestled covered with olive oil and water.
In about 432 B.C. Phidias created the 39 foot tall gold and ivory statue of Zeus that was one of the wonders of the ancient world. It was destroyed but there is discussion as to when and how. The workshop of Phidias was built to mirror the temple where the statue would be housed. His workshop was turned into a church but it was destroyed by an earthquake in the seventh century A.D. In front of the Temple of Hera is the bowl where the torch for the Olympics was lit in ancient times by a mirror. It symbolized the theft of fire for people by Prometheus. The use of the torch was reinstituted for the 1928 Olympics. Each April the torch is run to Athens, about 205 miles away.
There was no uniform system of measurement but they knew stadiums were a certain length and so things were calculated in “stadium” lengths.
The arch going to the stadium was quite impressive but totally clogged with visitors.
Our tour ended in Katakolon, the port where the ship was anchored. We were treated, along with two hundred other tourists, to snacks of olives, octopus, ----, and ---. There was Greek music and some dancers.
When we got back to the ship I finished The Guernsey Literary and Potato Peel Pie Society, an epistolary novel about the Nazi occupation of a channel island, while Linda dutifully worked out. We both napped. We haven’t recovered yet from the Egyptian excursion.
That night there was a gala dinner. Again we circled the napkins in the air, this time to salute the dessert, a version of Baked Alaska.
We went to the crew’s talent show. The singers were very good but the variety acts were amateurish.
FREE hit counter and Internet traffic statistics from freestats.com
Posted by A Penchant for Peru at 1:11 PM