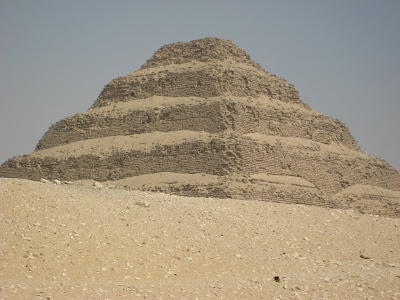 Vendors at the Steppe Pyramid 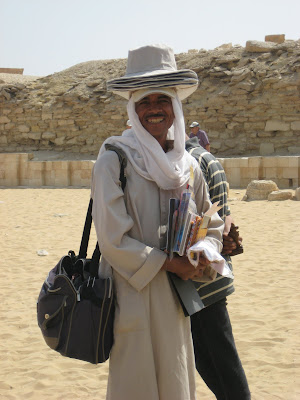 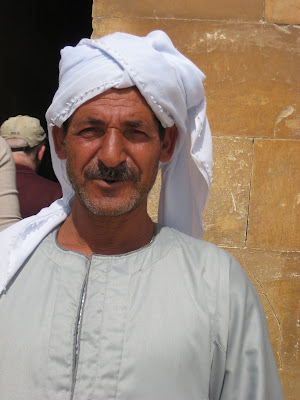 Gigantic statue of Ramses at Memphis 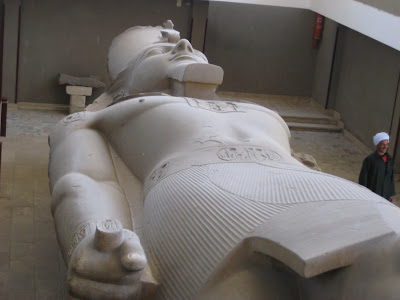 The pyramids are in the middle of the city of Giza 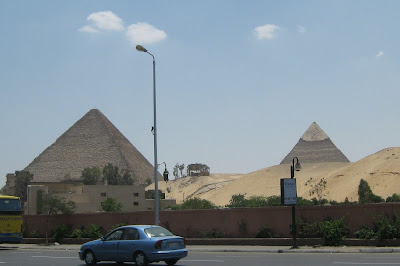 Riding camels in front of the pyramids 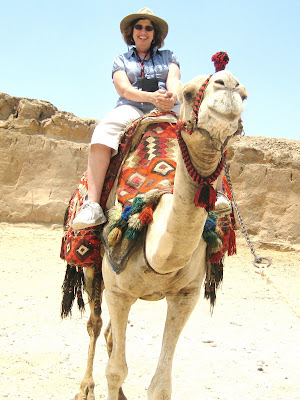 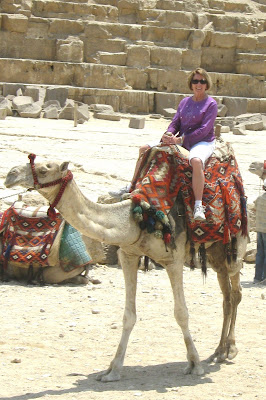 Detail of the pyramid of Cheops 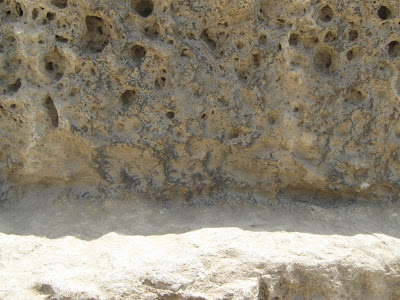 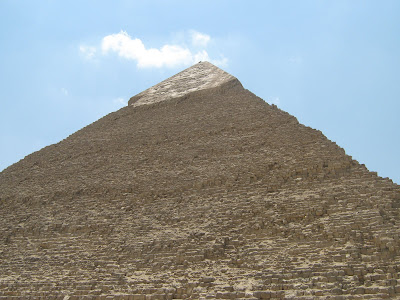 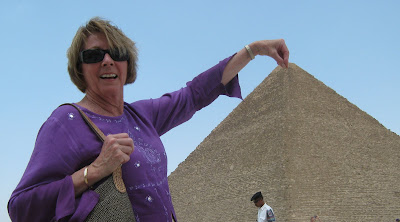 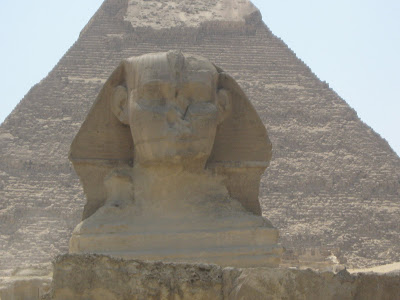 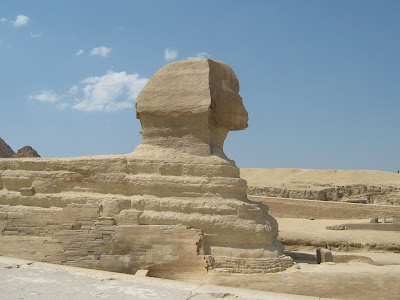 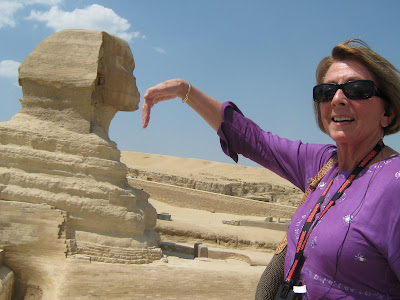 May 22 Egypt
After a sumptuous breakfast we went to Saqqara. First we visited the Mastaba of Mereruka, a burial tomb of a vizier who was also the Head of Justice, the Superintendent of the City, and brother-in-law of Teti the king of Egypt from 2323-2291 B.C.. It was built at the beginning of the sixth dynasty (2400 B.C.) and discovered in 1893 by a French mission led by Jacques de Morgan. Mastaba, which means bench or shelf in Arabic, was a tomb for the nobility. It was rectangular with the walls leaning slightly inward. This mastaba is the largest in the area, has 29 rooms, and probably was just like Mereruka’s palace. It is divided into three parts: for the owner, his wife, and his two sons. The hieroglyphics are very easy to read. The walls of the tomb have are painted with scenes of everyday life at the time: the professions, hunting, fishing, wine-making, offerings to the dead, and animals of the Nile. The rooms were quite small but the paintings were in extraordinary shape and amazing!
Next we went to the step pyramid of Djoser. The entrance to the pyramid has a courtyard of twenty columns over 19 feet high, each ribbed to appear like wood, and joined to the side wall.
The step pyramid is the largest building in the funereal center of Saqqara and the oldest structure in the world built entirely of stone. Djoser ruled for eighteen years during the third dynasty, around 2635-2510 B.C. It was built like a mastaba, but square, with layers added of descending size. It was originally 203 feet high with a base measuring 358 by 410 feet. The pharaoh’s burial chamber is in the center, 92 feet deep.
Our next stop was Memphis, the capital of Ancient Egypt. We saw the gigantic statue of Ramses. He is lying down now because an earthquake broke off his leg. We also saw a sphinx carved out of alabaster.
Finally we went to see the pyramids. Linda and I chose to take a camel ride rather than go into the pyramid as everything in there has been taken to museums. Hanan was not happy that we wanted camel rides, but she arranged them for six Euros. She would pay the drivers after we all finished our rides. When I got on Mickey, my camel, he was sitting down on the sand. As he stood up, I rocked very far backwards, and held onto the saddle handle with a death grip. You sit very high up on a camel, much higher than a horse. There is no possibility of getting down until the camel driver gets the camel to sit again. It was quite a thrill to ride a camel within one hundred feet of the pyramids! All went well for me and Linda. She even got a proposal from her camel driver. One of the women in our group said the driver wouldn’t let her down and wanted more money. She said she and her husband, on the ground, had to yell to get the driver to listen to them and not pay again.
The first and biggest pyramid was built by Cheops. It was completed in 2560 B.C. It took ten years to dig the track (canal) from the Nile to the site so that the huge thirty-foot stone blocks could be transported to the site. It took an additional twenty years to build the pyramid. Some texts say that slave labor was used. Our guide held the opposing view, that it was seen as holy work. The farmers worked on it during the three months that the Nile flooded and they couldn’t cultivate crops. It was 8 plethras (480.97 feet or fifty stories) on each side and the same height. Due to erosion it now stands 455 feet high. Up close the stones are not smooth but jagged. I actually touched the stones on the first layers of the pyramids! The pyramids are AWESOME!
The other two pyramids, Chephren and Micerinus, are slightly smaller. It was amazing to see the city skyline as a backdrop to the pyramids.
As we were snapping photos of the pyramids, an Egyptian guard (or perhaps army guy) offered to take pictures so that he looked like we were much larger than the pyramids and holding them. His name was Mustafa Mohammed. We had a nice conversation with him, really the only Egyptian who was willing to talk to us. He had two wives and seven children. He asked for no money, the only one who took pictures for free.
Next we went to see the Sphinx and the smaller pyramids for the wives of the pharaohs. We walked behind the wall and came upon many aggressive vendors. Linda bought an ashtray and a scarab from one who then offered to take our pictures “kissing” the Sphinx. After he took the pictures I gave him four Euros (about $6.00.) He followed us, shouting for more. He wanted ten more Euros! We eluded him and got back to the bus without further incidents.
We were exhausted by this time, but we were off to the papyrus factory and the jewelry store to pick up our cartouches and tee shirts with embroidered cartouches. Linda resisted the allure of the painted papyrus. I bought one with a scarab, the symbol of luck that was also going to be on my cartouche. I chose that rather than the rounded cross that symbolized long life and the lotus bud that stood for love. At the jewelry store, all the gold was 18 carat and sold by weight. I selected chains for my daughters-in-law’s cartouches as well as my own. I don’t know if Nick is going to wear the shirt as the embroidered cartouche is large.
The ride to the ship, which was now in Port Said, was uneventful except that we had an army escort. Upon entering the ship we had to give up our passports again. Why? We were too tired to attend the night’s entertainment, an illusionist.

FREE hit counter and Internet traffic statistics from freestats.com
Posted by A Penchant for Peru at 2:24 PM