Linda at a cafe in the Vienna airport 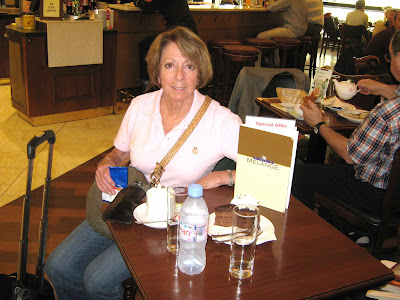 May 15-16, 2009 Westport, Massachusetts to Savona, Italy
Linda and I both had dreamed of visiting the pyramids. We started our journey in Westport, Massachusetts, where Linda lives. She arranged for a town car to take us to Logan Airport in Boston to begin the odyssey. We were able to check our luggage through to Italy. We traveled first to Washington D. C., then overnight on to Vienna. During that flight I met an Egyptian man who warned me about camel rides. He said that a price may be agreed upon before you mount, but unscrupulous camel drivers will extort more money to get off the camel.
We had a layover in Vienna and had a snack at a café before boarding the plane to Paris and finally to Genoa. Our plane was 45 minutes early but we had previously arranged for a taxi from the hotel in Savona, about 40 miles away. When no one came, I finally emailed the hotel on my Blackberry. I got an email back that we were waiting on the wrong level of the airport. We finally found our female taxi driver and she took us through many, many tunnels to reach Savona and the Hotel Riviera.
When we got into the room Linda was fascinated by the retractable wooden slats that were for security, privacy, and shading out the sunlight. She unrolled up the canopy on the balcony, from which we could see the Mediterranean. We noticed the bidet, which I found useful the next morning to shave my legs. We were too tired to venture out and had a very pedestrian meal at the hotel.

FREE hit counter and Internet traffic statistics from freestats.com
Posted by A Penchant for Peru at 5:30 PM