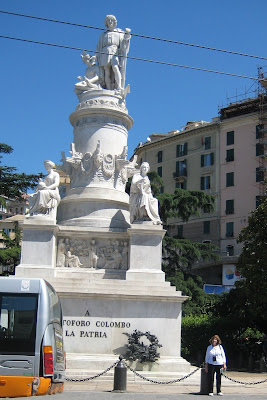 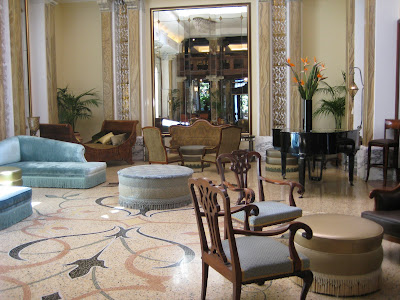 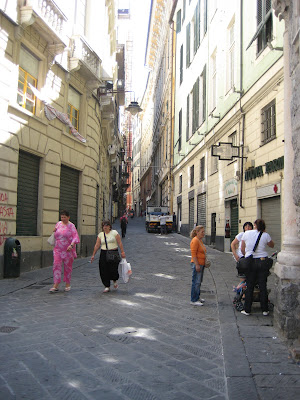 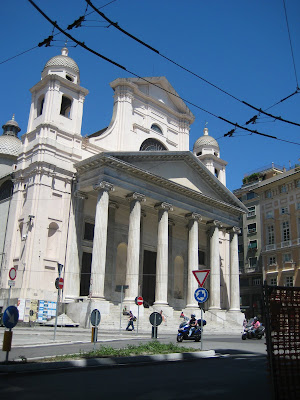 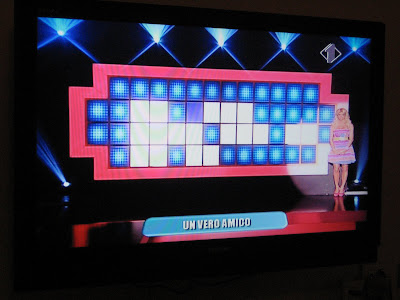 Italian Wheel of Fortune
May 28 Genoa
It turned out to be no problem to get our passports after eating breakfast. We sat in the theater awaiting our turn to disembark and take the bus transfer to the Genoa airport to start our odyssey home. While Linda was in the restroom I looked at our plane tickets carefully. They were for Friday, not Thursday! I panicked. When Linda got back I confessed my egregious mistake. I went to the Customer Service desk. They suggested we spend the night in Savona at the five-star Columbus Hotel. That did not jive with our transfer. I talked to a Costa representative in the theater and she suggested that we take the transfer to the airport and then take a taxi to Genoa and spend the night. We disembarked and picked up our luggage in the terminal. I was frantic. Linda was calm, knowing I would figure it out. When we went to the bus for the airport, I explained our dilemma to yet another Costa representative there. She said that the bus was a transfer to both the airport and the train station downtown. She suggested that we get off at the train station and stay at the Savoia Hotel which was near the station. This sounded like the best idea so far. We got off at the train station and dragged our luggage the few hundred feet away to the Savoia. When I inquired as to the rates, the woman quoted 200 Euros ($280). I bargained with her and we agreed on 170 Euros. Then she told me that the municipality had shut off the water! She assured me it would be turned on by the afternoon and we renegotiated the rate to 150 Euros.
We left our luggage and went to tour Genoa. We had to take a picture of the statue of Christopher Columbus, who was born in Genoa. We walked down the street and encountered the Museo Palazzo Reale Genova. We looked at the gardens and the carriage. We passed the university. As we walked I was surprised by so much graffiti on the walls.
There was a ship with a very strange mast head docked in the port. Along the water there was a “black market” of Africans selling knock-off purses and sunglasses.
By now it was about two o’clock and both of us were light headed from hunger. We found a restaurant nearby. No one spoke English and the menu was only in Italian. Linda felt safe ordering the antipasto. I saw an item, “polpo y frittata” and figured that was chicken and potatoes. Linda’s dish was an antipasto of fish, including shrimp, ---,---, and a little fish with many bones. I got potatoes all right, but it came with squid or octopus. Luckily it was delectable. When the tab came it included two Euros for “coperta.” This was the same we were charged in Rhodes. We assumed it was for the bread for which we hadn’t even asked.
We walked around some more, seeing a church with no name, padlocked, and “loiterers” on the steps. The narrow alleys had lots of shops but neither Linda nor I were interested. We stopped for a gelato (me) and a cappuccino (Linda.)
When we returned hours later to the hotel, the water still was not on! They promised if there was no water by 8 p.m. the room rate would descend to 130 Euros. The hallways as well as our room were quite luxurious. Linda stretched out between the bed and the upholstered lounge and immediately fell asleep. I read for while, then also napped. When we woke up the water was on.
We looked at the hotel restaurant menu but it was too expensive. We walked down the street and had pizza at the Ristorante Bar Trieste. Delicious. When the bill came we saw “coperta” for two Euros. Since we hadn’t had any bread I asked the waiter what it meant. It was the service charge! We had been leaving a tip on the table of every restaurant when we’d already been charged for it. Mystery solved.
We walked around some more. It started to get dark and we were in a questionable area. We both were nervous but putting on a brave face for each other. I asked directions from an Asian sales clerk and her response was to draw me a picture. This still did not help so we asked a fellow at an outside café who gave us good enough directions to get back to the train station which was next to our hotel We had ice cream and a cappuccino at a café near the hotel.
We went back to our room and flipped around the TV channels but didn’t find anything interesting except “Wheel of Fortune” in Italian, and BBC and CNN in English.
FREE hit counter and Internet traffic statistics from freestats.com
Posted by A Penchant for Peru at 11:52 AM