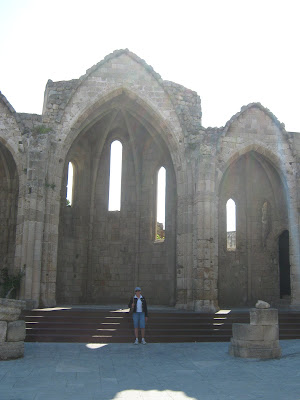 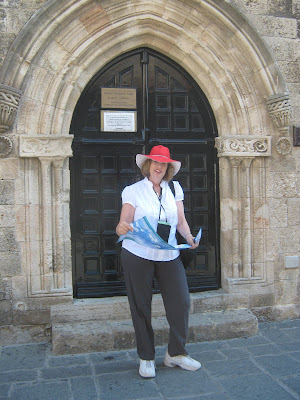 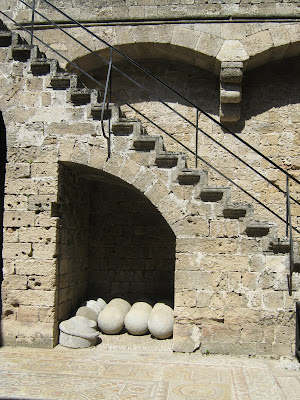 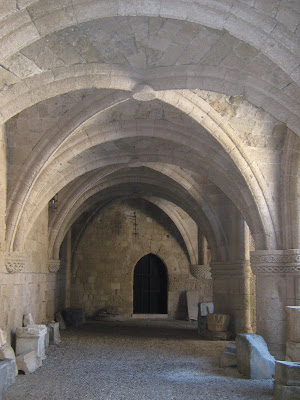 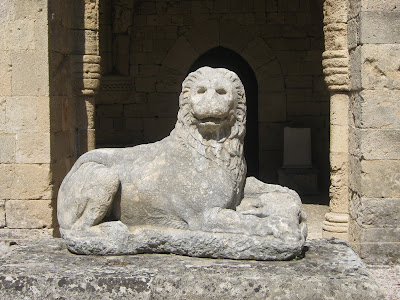 Pottery from the Attic red-figure period that started in 530 B.C. 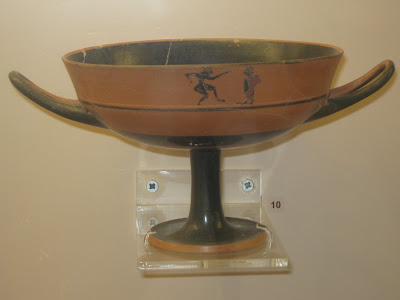 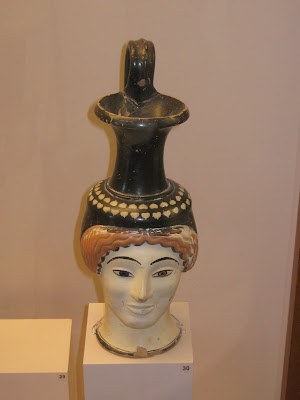 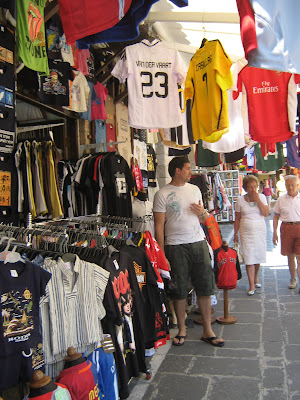 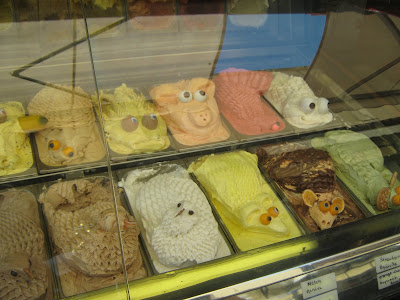 Annie at lunch on the market street 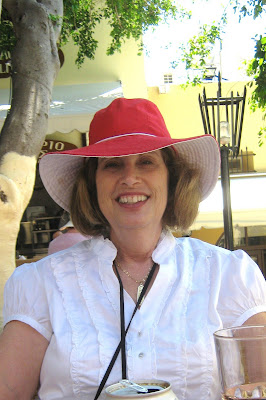 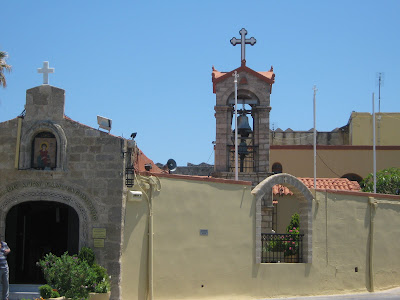 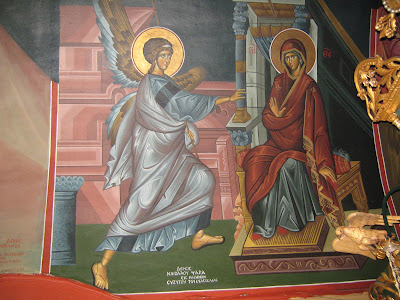 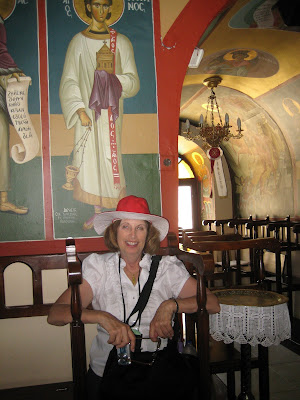 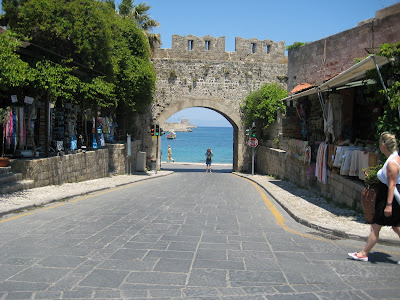 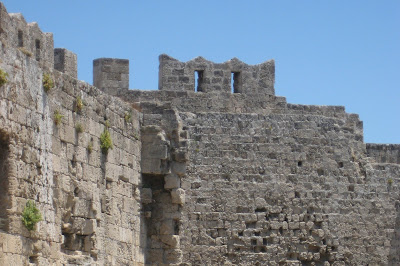 May 24 Rhodes
When we tried to get our passports back, we were told we wouldn’t need them until we got back to Italy. Rhodes is surrounded by an ancient wall. We docked right at the town and it was a short stroll into town. There were more shops than I’ve ever seen before! Jewelry, knock-off purses, scarves, belts, and clothing. The bronze statue of the Colossus of Rhodes, a wonder of the ancient world, was knocked down by an earthquake. No one bothered with the remains for a thousand years, when the Arabs took the pieces and melted and sold them.
We walked to the Archaeological Museum of Rhodes. It is housed in the medieval building of the Hospital of the Knights. In 1312 the Hospital Knights fortified the city as they got very wealthy when the Pope outlawed The Knights of the Templar. The hospital building was begun in 1440 and completed in 1489. The Knights supplied healthcare for Christian pilgrims but also engaged in piracy against Ottoman shipping and pilgrims. The knights were ousted from the island by Ottoman Sultan Suleyman the Magnificent in 1523. The Knights went to Malta where they remain to this day.
We saw pyramid piles of catapult balls and lots of pottery, mainly from the Attic red-figure period that started in 530 B.C. The pottery no longer displayed mythological figures, but had everyday life scenes.
We had lunch at a Greek restaurant. I had moussaka and Linda had a Greek salad. When she went to salt it, the top of the shaker came off and the salad was drowned in salt. She was given a new one, but checked every salt shaker she used on the rest of the trip.
On our way back to the ship we noticed the tiny Greek Orthodox Church of St. Panteleimon. It was built in the late fifteenth century, lavishly decorated, and the murals were amazing. The church was shaped like a “T” with pews down the center and on two sides and the pulpit in the middle of the top bar of the “T.” We met Butch and Angelo there. They noticed the laundry hanging out back with lots of black, the priest’s garments.
We took pictures of the old walls of the fortifications. The place had photo opportunities.
Back on the ship Linda went to the pool while I read.
We also attended another almost unintelligible lecture by Matteo Marinelli. Good thing I have ESL (English as a Second Language) training. He started out by saying that the Greeks consider anyone who doesn’t speak Greek as a “barbarian.” He went on to talk about Athens. It is surrounded by seven hills, like Rome. The most impressive hill is the rock of the Acropolis. The soil of Athens is not fertile but the water is clear. The climate is so arid that grapevines, olive trees, barley, and wheat are the most numerous crops, but the denizens always had to import provisions.
The Acropolis is a level rock and stands 511 feet above the sea. It is considered a sacred zone. The symbol of civilization in the Acropolis is the Parthenon. Iktinos and Kallikrates were the architects of this Doric temple and the sculptor Phidias oversaw the building of it from 447-431 B.C. It is the only marble temple and follows the mathematical principle of “4/9,” the golden ratio. Its base measures 228 by 101.4 feet.
Athenians chose to adore Athena, the goddess of civilization, reflection, intelligence, thinking, and all projects. Athena came out from the head of her father, Zeus. She was a virgin so that she couldn’t be contaminated by feeling of sexuality. She is portrayed in armor and a helmet, never naked.
After the presentation, Matteo gave me information on how to take the bus from the port to a metro train to the Acropolis. He said it was easy.
Dinner was an adventure. The entrees and desserts were getting weirder. The padre, Angelo, was the only one of us brave enough to order the chocolate prune ice cream for dessert. Butch and Angelo are taking a tour of Athens. Linda and I agreed to do our own tour with Joanne and Werner.
We attended the “Jukebox Jive” entertainment and it was the best show so far. Most of the songs were sung in English. Although it was supposed to be songs of the 50’s, 60’s and 70’s, there were also quite a few from the 30’s and 40’s. Why does the showroom have poles that obstruct the view from many of the seats? The technicians again went crazy with the smoke machine.
Posted by A Penchant for Peru at 1:51 PM